PSA: this post will quite possibly make you stop reading this blog. It is that riveting. I wish I could tell you we freed the libyeans, (sp?), or whatever is going on over there. I really need to start acting like a grown up and paying attention to the news stories so I can start talking like a big girl. Back to the reason for the post:

Well last week operation “get-the-tool-dislodged-and-sucked-out-of-the-pipe-that-has-made-our-downstairs-bathroom-a-leper” commenced. It took about 5 months of prayer, 4 grown men and my husband. I couldn’t watch. If this effort succeeded we would not have to spare our 1st born. {Not really} We would not have to spend 3,000 bones and compromise our post tension slab foundation to fix this speedbump. If it didn’t work, well then we would have had to spend $1000.00 to try, and $3,000.00 to do what you just read. That would have been a lose, lose, fyi. Regardless, God provided the money.

So after my friend Tina’s husband, (a contractor), took the wall down, he couldn’t get to the blockage. So his team realized there was a connector on the sink pipe from  when plumber #5 punched our our wall and punctured the pipe a la 2008. By going through the connector and using magnets, Marc started trying to get it out. 15 minutes, a whole lotta sweat and a pouty quivering lip later, MARC GOT IT!!!!!!!! Unbelieveable. Truly. Unbelievable. It was a miracle-a real miracle and answered prayer that involved a rusty ole: 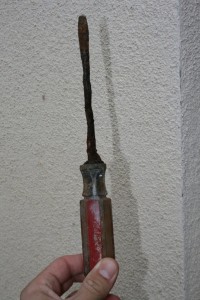 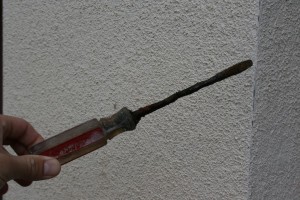 screwdriver. Really? Yep. A screwdriver in a pipe. Of course. How perfectly logical. 2 years of broken toilet, panic sweats at every brave guest that “flushed” and 9 plumbers later…That had to be love gone bad. Nobody needs a screwdriver when installing toilets. Even I know that.
So basically Chad almost tackled Marc and the 4 person team he brought, then realized they would would probably beat him for trying because they are tough guys with manly muscles and stuff. So he gave air hugs, and we cried like babies when he told me.
God worked the whole situation for His glory-praise HIM! He even cared about this stupid rusty screwdriver. Working together the punctured pipe from 2 years ago. Reminds me of the lost ax head in 2 Kings. God cared about that tool enough to allow it to be found. There is no lofty expostion here,  just sayin’.
April 25, 2011 by Michelle White

I love my Savior, Jesus. This blog's original purpose was to document evidence of humility the next time I start to think I might have it together. I needed somewhere to record all the shenanigans that happen up in here, never once thinking God's plans for our lives might be extra...ordinary.

These last few years have held the restoration and redemption of a marriage, the diagnosis of a brain tumor and the loss of our 26 day old baby boy, Christian. We continue to navigate the waters of grief, while being molded in the image of our Savior.