Oops, I did it again.

the fruit of my labor 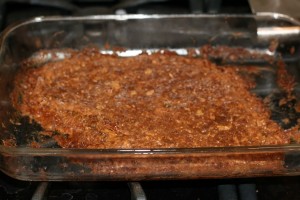 C thought it was Chili. 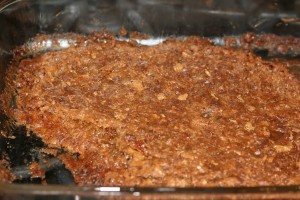 What are those irregularly shaped cutouts you ask?  An act of desperation-you don’t want details. The story behind this? Originally took it out 20 minutes early, didn’t realize it was a FAIL until I cut a piece and the center ran out. So I did some damage control and cut out the “cooked” parts. (to ensure I ate some morsel of this disaster), put it back in the oven, and apparently forgot to hit *enter* on the oven timer. 30-45 minutes later, my trusty oven emitted enough smoke to fill the 1st floor, thus I flew down the stairs on my broom. (not really). I believe the noise made when I bounced the knife off this motherload, was “chink”.
Because there was no glorious purpose in deciding to bake this, I let lil Stink be my assistant. (by the way 3 year old are even worse direction followers than I previously thought). Which is why each ingredient was either friends with the floor or inappropriately handled with unwashed little boy hands. Yack. 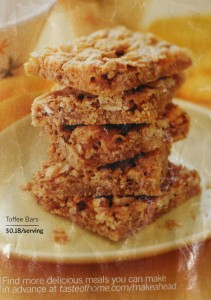 I love my Savior, Jesus. This blog's original purpose was to document evidence of humility the next time I start to think I might have it together. I needed somewhere to record all the shenanigans that happen up in here, never once thinking God's plans for our lives might be extra...ordinary.

These last few years have held the restoration and redemption of a marriage, the diagnosis of a brain tumor and the loss of our 26 day old baby boy, Christian. We continue to navigate the waters of grief, while being molded in the image of our Savior.